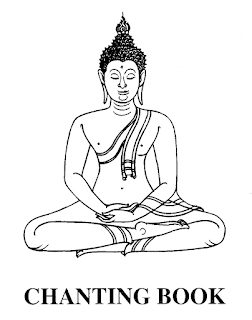 To the Blessed One, the Buddha, who fully attained perfect Awakening,
svākkhāto yena bhagavatā dhammo

we respect with offerings, our rightful homage.
sādhu no bhante bhagavā suciraparinibbutopi

It is well for us that the Blessed One, having attained liberation,
pacchimājanatānukampamānasā

I bow down before the Awakened, Blessed One.
(BOW DOWN)

The Dhamma is well expounded by the Blessed One,
dhammaṃ namassāmi.

I pay homage to the Dhamma.
(BOW DOWN)

The Saṅgha of the Blessed One's disciples has practiced well,
saṅghaṃ namāmi.

I pay respect to the Saṅgha.
(BOW DOWN)

Now let us chant the preliminary passage in homage to the Awakened One, the Blessed One:

Homage to the Blessed One, the Worthy One, the Rightly Self-awakened One. (Three Times)

1.3 Praise for the Buddha

Now let us give high praise to the Awakened One:

He who has attained the Truth,
arahaṃ

consummate in knowledge and conduct,
Sugato

one who has gone the good way,
lokavidū,

unexcelled trainer of those who can be taught,
satthā devamunassānaṃ

Who expounded the holy life both in its particulars ad in its essence, entirely complete, perfectly pure.
Tamahaṃ bhagavantaṃ abhipūjayāmi

to that Blessed One I bow my head down.
(BOW DOWN)

1.4 Praise for the Dhamma

Now let us give high praise to the Dhamma:

To be seen here and now,
akāliko

to that Dhamma I bow my head down.
(BOW DOWN)

Now let us give high praise to the Sangha:

Namely, the four pairs, the eight types of noble ones,
esa bhagavato sāvakasaṅgho,

1.6 Salutation of the Triple Gem

(The Topics for Chastened Dispassion)


Now let us recite the stanzas in salutation to the Triple Gem together with the passage on the topics inspiring a sense of chastened dispassion:

possessed of the eye of knowledge completely purified,
lokassa pāpūpakilesaghātako,

divided into Path, Fruition, and the Deathless,
lokuttaro yo ca tadatthadīpano

The Saṅgha, called a field better than the best,
yo diṭṭhasanto sugatānubodhako

who have seen peace, awakening after the one gone the good way,
lolapphiīno ariyo sumedhaso,

I revere that Saṅgha with devotion.
Iccevamekantabhipūjaneyyakaṃ

By the power of the merit I have made,
vatthuttayaṃ vandayatābhisaṅkhataṃ

and Dhamma is explained, leading out of samsara -- calming, tending toward total Nibbāna.
sambodagāmī sugatappavedito.

In short, the five aggregates for clinging are stressful.
Seyyathīdaṃ: rūpūpādānakkhandho,

Namely: Form as an aggregate for clinging,
vedanūpādānakkhandho,

feeling as an aggregate for clinging,
saññūpādānakkhando,

perception as an aggregate for clinging,
saṅkhārūpādānakkhando,

mental precesses (mental formations) as an aggregate for clinging,
viññāṇūpādānakkhando,

so that they might fully understand this, the Blessed One, while still alive,
evaṃ bahulaṃ sāvake vineti.

Many times, did he emphasize this part of his admonition.
Rūpaṃ aniccaṃ,

(Think) Oh, that the end of this entire mass of suffering and stress might be known.

we have gone forth in faith from home to homelessness in dedication to him,
tasmiṃ bhagavati brahmacariyaṃ carāma,

may this holy life of ours bring about the end of this entire mass of suffering and stress.

Though the total liberation of the Blessed One, the Worthy One, the rightly Self-awakened One, was long ago, we have gone for refuge in him,
dhammañca bhikkhusaṅghañca,

we attend to the instruction of the Blessed One, as far as our mindfulness and strength will allow, and we practice accordingly,
sā sā no paṫipatti, imassa kevalassa dukkhakkhandassa antakiriyāya saṃvattatu.

may this practice of ours bring about the end of this entire mass of suffering and stress.

Creating a form with a thousand arms, each equipped with a weapon, Mara, on the elephant Girimekhala, uttered a frightening roar together with his troops. The lord of sages defeated him by means of such qualities as generosity: by the power of this, may you have the highest victory of blessings.

Even more frightful than Mara making war all night was Alavaka, the arrogant unstable ogre, the lord of sages defeated him by means of well-trained endurance: by the power of this, may you have the highest victory of blessings.

Nalagiri, the excellent elephant, when maddened, was very horrific, like a forest fire, a flaming discus, a lightning bolt. The lord of sages defeated him by sprinkling the water of good will: by the power of this, may you have the highest victory of blessings.

Very horrific, with a sword upraised in his expert hand, Garlanded-with-Fingers ran three leagues along the path. The lord of sages defeated him with mind-fashioned marvels: by the power of this, may you have the highest victory of blessings.

Having made a wooden belly to appear pregnant, Cinca made a lewd accusation in the midst of the gathering, the lord of sages defeated her with peaceful, gracious means: by the power of this, may you have the highest victory of blessings.

Saccaka, whose provocative views had abandoned the truth, delighting in argument, had become thoroughly blind, the lord of sages defeated him with the light of discernment: by the power of this, may you have the highest victory of blessings.

Nandopananda was a serpent with great power but wrong views. The lord of sages defeated him by means of a display of marvels, sending his son (Moggallana), the serpent-elder, to tame him: by the power of this, may you have the highest victory of blessings.

His hands bound tight by the serpent of wrongly held views, Baka, the Brahma, thought himself pure in his radiance and power. The lord of sages defeated him by means of his words of knowledge: by the power of this, may you have the highest victory of blessings.

These eight verses of the Buddha’s victory blessings: whoever person of discernment recites or recalls them day after day without lapsing, destroying all kinds of obstacles, will attain emancipation and happiness.

(The Buddha), our protector, with great compassion, for the welfare of all beings,
pūretvā pāramī sabbā patto sambodhimuttamaṃ

may you have the same sort of victory, may you win victory blessings,
aparājitapallaṅke sīse paṭhavipokkhare

with regard to those who lead the chaste life, doing these rightful things, your rightful aims are achieved.

(Reflection at the Moment of Using the Requisites)

Now let us recite the passage for reflection at the moment of using the requisites:

to ward off the touch of flies. mosquitoes, wind, sun and reptiles,
yāvadeva hirikopinapaṭicchādanatthaṃ.

simply for the purpose of covering the parts of the body that cause shame.
Paṭisaṅkhā yoniso piṅḍapātaā paṭisevāmi,

but simply for the survival and continuance of this body,
vihiṃsuparatiyā brahmacariyānuggahāya,

for ending its afflictions, for the support of the holy life,
iti purāṇañca vedanaṃ paṭihaṅkhāmi

a, there will be free from physical troubles and living at ease.
Paṭisaṅkhā yoniso senāsanaṃ paṭisevāmi,

to ward off the touch of flies. mosquitoes, wind, sun and reptiles,
yāvadeva utuparissayavinodanaṃ paṭisallānārāmatthaṃ.

simply for protection from the inclemency of weather and for the enjoyment of seclusion.
Paṭisaṅkhā yoniso gilānapaccayabhesajjaparikkhāraṃ paṭisevāmi,

simply to ward off any pain of illness that has arisen,
abyāpajjaparamatāyāti.

and for maximum freedom from disease.

(Reflection of using the Requisites)

the robe as well as the individual that uses it,
dhātumattako

the alms-food as well as the individual that uses it,
dhātumattako

the lodging as well as the individual that uses it,
dhātumattako

the medicinal requisite as well as the individual that uses it,
dhātumattako

Let us now make the dedication of merit.

in the pagoda in the bodhi tree,
tā dhammadānena bhavantu pūjitā

may all creatures whether born from water, an egg, moisture or from the worm,
niyyānikaṃ dhammavaraṃ paticca te

may we all progress in the Dhamma which the Noble on has made manifest,
pasannā hontu sabbe pi paṇino buddhassāsane

so according to the Dhamma, may kings always protect their subjects.

May I be free from enmity.
Ahaṃ abyāpajjho homi.

May I be free from ill-treatment.
Ahaṃ anīgho homi.

May I be free from trouble.
Ahaṃ niddukkho homi.

May I protect my own happiness.
Ahaṃ sukhito homi

May all beings be happy.

[For this last chant, after the leader, we chant the Palī then English translation together.]


THE END OF MORNING CHANTING


In order to make this happen this was posted in phases and steps. There are sure to be errors that will need correction. There may also be incorrect renderings, translations, transliteration, etc. Please let us know about such errors. Any mistakes are not intended and will be corrected as soon as possible.

Please review the Chanting Book Project Notes for progress on this.

Any negligence is mine and should not be viewed as that of the Three Gems, Thai community or Wat Pasantidhamma.  --Ed. Alex Nuttall. 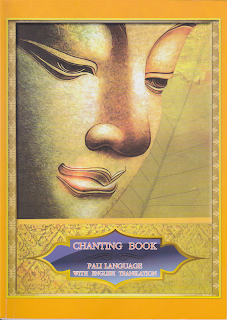 This blog is dedicated to the those who take refuge in the Buddha, Dhamma and Sangha. It is dedicated to those who have supported and continue to support Wat Pasantidhamma. It is also dedicated to our teacher Ajan Udom. Finally it is dedicated to all those who wish to end suffering. Ajan Udom This blog is about the Chanting Book for English practitioners of the Theravada Forest tradition that can be found at Wat Pasantidhamma. This book was generously produced and given to those who want it. It is a simple guide in practice. The chants are in Pali and translated into English. This chanting is meant to awaken those into the practice of meditation.  Ajan Udom and Lay Practitioner This book will be reproduced fully here and made available to anyone who is interested. We will also provide digital recordings of the chants and video as time progresses. Chanting Book Inside Cover Ajan Udom has given his permission this project. Gratefully we undertake this 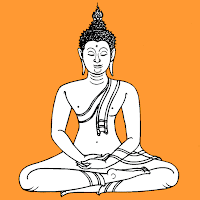 Buddha 1. Chanting in Buddhism can be classified into two main types according to tradition: i.e., Theravada and Mahayana. Theravada uses Pālī as the principal language, but Mahayana uses Sanskrit translated into the native language of each country. The Purpose of chanting can be outlined as follows: To maintain the original tradition by reciting the Buddha's teachings To use chanting as part of the religious ceremonies and traditional rituals To strengthen the faith of newcomers to Buddhism To aid meditation To be a basis for Buddhist education and increase wisdom To build up inner strength of mind and to enhance the power of meditation To dispel wicked and inauspicious thoughts occurring in one's mind Introduction, Page 1 2 . The chanting of the Thai Theravada sect is further divided into two styles. In one the chanting uses the original Pālī, in the other a Thai translation. Those who chant for the purposes of "d" and "e" a 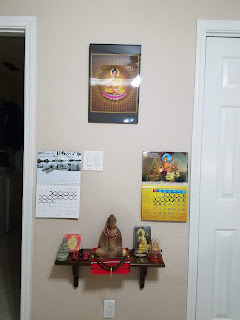 Home Meditation Shrine The Evening Chanting has been completed with regards to the general transcription. PART 2:  Evening Chanting 2.1  Dedication of Offerings 2.2  Buddha Namatthu  ( Homage to the Buddha ) 2.3  Buddhanussati  ( The Recollection of the Buddha ) 2.4  Buddhaguṇa  ( Celebration of the Buddha ) 2.5  Dhammanussati  ( The Recollection of the Dhamma ) 2.6  Dhammaguṇa  ( Celebration of the Dhamma ) 2.7  Saṅghānussati  ( The Recollection of the Saṅgha ) 2.8  Saṅghaguṇa  ( Celebration of the Saṅgha ) 2.9  Karaṇīyamettasuttaṃ  ( Sharing on Good Will ) 2.10  Maṅgalasuttaṃ  ( The Supreme Blessing ) 2.11  Atītapaccavekkhaṇa ( Reflection on the Four Requisites ) 2.12  Udissanādiṭṭhānagāthā  (Iminā) ( Sharing Blessings ) 2.13  The Sublime Attitudes  ( Sharing the Loving Kindness ) Next the Special Sutta (Part 3 ) will begin: PART 3:  Special Sutta 3.1  Manopubbaṃamā  ( Phenomena Preceded by the Mind ) 3.2  Khemāgāthā  ( The Secure Refuge ) 3.3  Yathā